Why is the Nevasic app so good for Pregnancy Sickness?

It’s been through 18 months of

initiated and managed independent research with Pregnant Women culminating in an over 90% success rate.
DRUG FREE

Leaves nothing with you

Who research Nevasic for pregnancy Sickness?

The results were condensed into a synopsis and the calculations reveal the product reduced or stopped sickness in over 90% of instances. The results showed the product produced a reduction or cessation of symptoms for mothers with a variety of symptom strengths – even dealing with Hyperemesis Gravidarum the most severe form.

We have placed below the full text report from the study management and the data sheets collated during the study showing how pregnant women responded on an individual basis. Click on each item to reveal the data.

The research was commissioned by:

The Winchester and Eastleigh

Trust in conjunction with mothers attending the Andover

The study was managed by:

The full report generated by the research was published in “The Practising Midwife”;

HOW OFTEN DO WE SEE the elation of pregnancy diminished by the distress of “morning sickness” Nausea and vomiting in pregnancy (NVP) is non-specific, it affects approx. 80% of pregnant women[1], and the range of symptoms extend from mild nausea through to the extreme of Hyperemesis Gravidarum[2]. It can last all day, it can keep recurring in waves. The actual aetiology is still unclear and there are various theories but NVP is mainly attributed to altered hormone function, physiological and metabolic changes and genetic incompatibility [3]. This preliminary study introduces the ‘Morning Well tape’ in to the lives of pregnant women and exciting initial findings have shown a marked reduction of symptoms.
“I can’t eat anything” “I feel wretched” “I’m nauseated all the time” “I can’t cope with the family” “I can’t get out of bed and I’ve never been ill in my life” I’m struggling to be at work” etc. These words are so familiar, and what is our response? Sympathy.

Whitehead SA, Andrews PLR, Chamberlain GVP
2 Lacroix R, Easton E, Melzack R. Nausea and vomiting during pregnancy
3 Lindsay P. Vomiting.In: Sweet B. Mayes Midwifery, 12th edition. London: Bailliere Tindall,1997The MorningWell tape was derived from TravelWell . TravelWell is a successful travel sickness product, endorsed by Ellen McArthur.  It was developed over a number of years, working on the physiology of emesis; there is a recognized correlation between the brain, the vestibular system, and the gut.[4] The audio tape was devised to react on the vestibular system in such a way that it interrupted the emesis signals to the gut and stopped the sickness. The frequencies and pulses are bordering on our recognisable audio spectrum, but still have a profound effect on the ear. The music overlaying the sounds just makes for more pleasurable listening.  It has to be used with a personal stereo.
DAVAL, the Andover company responsible, had never thought of the tape being used for anything other than motion sickness, until a couple of women contacted them to ask if it would help in pregnancy, as their symptoms were just the same. DAVAL made no claims at all, but the women used the tape and it worked.  Fascinated by this result, DAVAL came to us.
It was radical, it was fascinating, and we were cynical!
We looked at the product in depth with safety, the overriding priority. Safety for the woman and the fetus. The tape was non- invasive and under the control of the woman (turned on and off at will).
We undertook this preliminary study to find out if this tape worked?  In order to do this, we needed to ask the women, and we needed to contact them early enough to offer the tape. Together with DAVAL we devised a questionnaire, which was subsequently passed by the Ethics Committee.

QUESTIONNAIRE FORMAT
We advertised in GP Surgeries, the local paper, local radio, NCT magazine, that we were running a preliminary study on MorningWell – not that we were endorsing it – but that we were interested in its efficacy. We put a brochure into every booking pack and the midwives offered a free tape if NVP was a problem.
We were all very sceptical, but keen to get the responses.4.    Veyrat-Follet C; Farinotti R; Palmer JL.. Physiology of Chemotherapy-induced emesis and antiemetic therapy. Medline Indexing Date :199706. www.medscape.com/medline.

As published in
The Practising Midwife

This is the one safe option that a midwife can give.  We can support and we can acknowledge their distress.  As midwives we can recommend ginger, dry biscuits, frequent snacks, Travel bands, and various other helpful hints. All have anecdotal efficacy. Homeopathic, herbal remedies and acupuncture, can only be prescribed by a specialist. There is no evidence based cure for NVP.

The historical evidence with systemic medication (thalidomide) precludes women  from wanting to take anything at all, and NVP is a condition that women expect and tolerate.
When the DAVAL Company approached the Andover Birth Centre, late last year, to ask if we would be interested in an audio-tape that might ease morning sickness—we were intrigued.  This was a completely new and radical idea. Is it a relaxation tape? Is it subliminal messages—“You will not be sick!” —Is it just pleasant music to take your mind off the nausea?  We wanted to know more.

Analysis and Results
The early feedback from the questionnaires, though positive, showed that there were some difficulties understanding the use of the tape. The programme is made up of 3 phases. The first draws the vestibular system away from the general acoustic and balancing priority, the second is focused on preventing the transmission of the emetic signals to the brain and the gut, and the last phase returns the vestibular system to normal operation.  (There have been no reports of any problems with balance). The instructions now highlight the necessity of rewinding the tape prior to each use.  It can be used as often as NVP causes a problem, and used from the onset of symptoms for at least 20 mins initially, or until  sickness eases or stops.
As we all know, questionnaires are notorious for—getting lost, getting eaten by the dog, left in the rain, drawn on by the toddler, etc., but the women of Andover were very helpful, and the results followed.
150 audio-tapes were offered.
To date we have had 89 questionnaires returned fully completed, 25 fully completed but non-compliant. These returns, we felt couldn’t be in the final numbers, because other remedies had been tried at the same time, i.e. homeopathic remedies, herbal teas, Travel bands etc. 37 questionnaires were not completed for a variety of reasons, the most frequent being that the tape was never used.

PIE CHART
The results have been excellent. Originally we thought if it worked for 30% of women that would be amazing. At the time of writing this article it is 90%. The results show that of the 89 women that used the tape appropriately only 3 had no benefit at all. The results to date show that the greatest percentage of efficacy is produced by the 4th day. Some women found no effect the first time, but subsequent usage produced increasingly good effects.

% chart
The whole mood of the study has changed.  Originally we were all very cynical, and felt that some of the ecstatic responses we received must be due to other reasons but gradually the women’s comments, testimonials, ticks in the box, have made us take it all more seriously. We are now disappointed if the tape fails to ease the symptoms, and try and ensure that the tape is being used in the most beneficial way. A full list of the results, and the testimonials can be seen on the web site:  http://www.andoverbirthcentre.org. 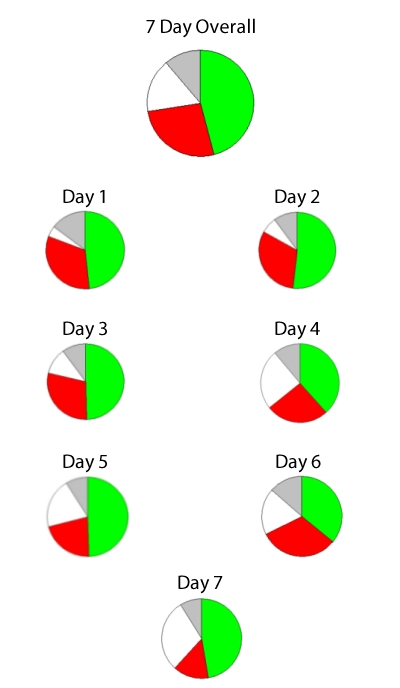 On a woman by woman basis;

You can buy the Nevasic app for Apple or Android devices!